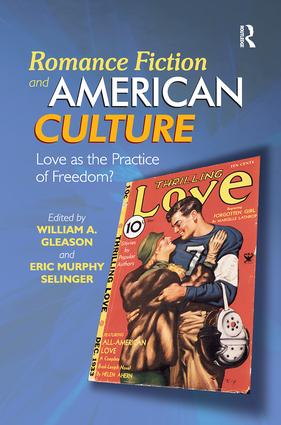 The 1980s were fraught for feminism and romance. The decade was dominated by the conservative two-term presidency of Ronald Reagan, whose executive order defined the family as one locus for “preserving America’s future.” It included challenges to Roe v. Wade and the feminist sex wars, intense debates over pornography, sexuality, and sexual practices. In this climate, the feminist interest in romance – as genre, narrative structure, and cultural dynamic – shifted to include a new emphasis on the cultural work it might do for women. Tania Modleski’s Loving with a Vengeance (1982) and Janice Radway’s Reading the Romance (1984) challenged prior feminist condemnations of romance for denying women either agency or desire, suggesting that women had far more complicated relationships to romance.

The 50 Shades phenomenon demonstrates that romance continues to trouble contemporary feminism. These concerns surface in two very different books published in 2016: Publishing Romance: The History of an Industry, 1940s to the Present (Markert) and Romance Fiction and American Culture: Love as the Practice of Freedom? (Gleason and Selinger, eds.). Focused on the industry side of things, John Markert’s monograph has little explicit discussion of feminism, but its attention to acquisition, editorial, and marketing practices leaves no doubt that the concerns romance publishers were managing as early as the 1950s resonated with those of the U.S. women’s movement. Meanwhile, Gleason and Selinger’s essay collection focuses on the cultural and political capital of love. Centrally concerned with feminism, it highlights the genre’s impulse towards increasing diversity in representations of sexuality, race, and sexual practices.

From the outset, Markert writes that Publishing Romance “sidesteps judging the content of romance novels” (5). He argues that “the structure of the romance publishing industry” is crucial to a history of the genre (5), and describes the paperback revolutions that enabled romance-exclusive imprints and cross-house competition, the shifts in content that shaped market demands, and the evolving prominence of editors. For this history, he includes not only well-known accounts of paperback (Tebbel) and mass market publishing (Crider), but also genre magazines, newsletters, guides, organizations (Romantic Times, Love Lines, the Romance Writers of America) that have become go-to resources for readers, and extensive interviews with editors about the day-to-day of romance publishing. The strength of this mixed method is variety and the richness of material that affords. Interviews with company president and editorial staff capture the conflicts – business-driven and ideological – underlying Harlequin Presents, a line of more sexually explicit romances the company introduced in the early 1970s. In a similar vein, tracking the rise of female editorial assistants to editorships across the industry provides a glimpse of the changes in staffing that the romance phenomenon generated. Yet all the while, Markert says little about feminism except to remark on its criticism of the genre. When the women’s movement makes an appearance, it is as the origin of the critique of romance, not as a cultural force that places a premium on women’s desires. Markert’s history would have been enriched by attention to feminist history.  For example, Betty Friedan’s The Feminine Mystique reached the one-million-copies-sold mark in 1964, the same year Harlequin decided to devote its entire list to reprints of Mills and Boon romances. The 1980s boom in romance publishing, when a number of houses increased their more sexually explicit offerings, coincided with feminist debates about sexuality and sex practices, and the most recent diversification of the genre has a counterpart in feminist discussions of intersectionality.

In contrast, the cultural situated-ness of romance is at the heart of Romance Fiction and American Culture. Working from the premise that romance fiction draws on the “extravagance” long associated with romance, the collection identifies love as that impulse capable of both preserving and disabling conventions. The collection is organized into sections focused on the convergence of popular romance with American history, the relations between romance and race, the tensions between art and commerce, and the contested question of “happy endings.” Textual analysis dominates, broadly feminist in its attention to romance and its forms, but women’s consumption of romances also has a significant presence – from the implied reception of Pamela in the colonial U.S. to the readers of sentimental novels in the Civil War south, from lesbian pulps and their post-World War II femmes to one author’s reflections on her M/M/F ménage romance. Other essays examine the publishing history of late nineteenth-century romance libraries, the branding of novels through cover art, and the visual rhetoric of Kara Walker’s silhouettes. In deploying their varied feminisms, the contributors balance description and critique – a feat that emphasizes that in romance, critical practice and pleasure can be mutually inclusive.