At a time when public figures, the media, and the public are locked in an ongoing daily battle to define the truth, it feels wise to draw our attention to the relationship among public figures, the media, and the public in a period other than our own. In his new book, Lecturing the Atlantic: Speech, Print, and an Anglo-American Commons, 1830-1870, Tom F. Wright does just that.

END_OF_DOCUMENT_TOKEN_TO_BE_REPLACED

Simply because the Internet exists, the opinions on a medieval-style fantasy novel series called A Song of Ice and Fire or on Game of Thrones (GoT) in the television adaptation are easily found. Today, in addition to hearing from professional critics on staff at The New Yorker, The Guardian, and The Metro papers, various GoT fans can share their pop culture thoughts on Reddit, Facebook, Twitter, Instagram, and other social media social platforms, pop culture websites, and discussion forums.

END_OF_DOCUMENT_TOKEN_TO_BE_REPLACED 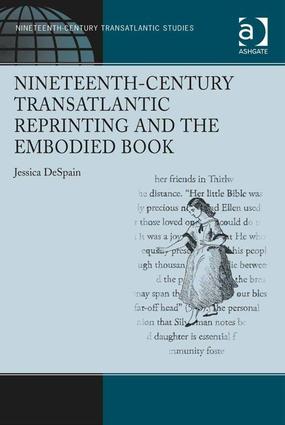 Nineteenth-Century Transatlantic Reprinting and the Embodied Book centres on the transatlantic book trade from the 1840s through the 1890s, looking at the circulation of British books in the United States and American books in Britain. Basing her argument on extensive archival research into multiple editions of reprints, as well as on reviews, advertisements and readers’ letters, Jessica DeSpain details the “indiscriminate nature of transatlantic transmission” (11), offering an analysis of the different ways that books were reframed for various American and British audiences.

END_OF_DOCUMENT_TOKEN_TO_BE_REPLACED

Charlotte Brontë: An Independent Will

Charlotte Brontë: An Independent Will

“I am no bird, and no net ensnares me. I am a free human being with an independent will, which I now exert to leave you…it is my spirit that addresses your spirit; just as if both had passed through the grave, and we stood at God’s feet, equal,—as we are. ” Who can forget Jane Eyre furiously taking her stand against Rochester after he railed that she was behaving like a “wild frantic bird” in proto-feminist passages where Jane demanded equal recognition of the sexes in this eponymous novel? For the 200th anniversary of Charlotte Brontë’s birth the Morgan Library and Museum presented American viewers for the very first time the bound manuscript of Jane Eyre, on loan from the British Library.

END_OF_DOCUMENT_TOKEN_TO_BE_REPLACED

With strong opinions of belonging and citizenship motivating current debates on immigration reform and global economics, Vanessa Schulman’s Work Sights: The Visual Culture of Industry in Nineteenth-Century America proves timely, providing useful historical context through which we can understand the ways that these concepts were shaped and circulated in nineteenth-century America.

END_OF_DOCUMENT_TOKEN_TO_BE_REPLACED

Deluxe limited editions with an author’s inscription were common at the end of the nineteenth century, but it is surprising to find a 1900 Haworth Edition of the novels of Charlotte Brontë signed, “Sincerely yours, C. Brontë,” as she had died a half-century earlier. While Susan Ryan only references the practice of facsimile signatures in passing, her discussion of what she calls the “moral economy” of authorship makes sense of this practice as a marketing ploy.

END_OF_DOCUMENT_TOKEN_TO_BE_REPLACED

Heather Haveman. Magazines and the Making of America: Modernization, Community, and Print Culture, 1741-1860

Haveman’s work explores the changing ways that American magazine publishing and distribution helped create and shape local communities and, increasingly during the nineteenth century, the trans-local communities that are a hallmark of modern life. Her narration and synthesis of data and scholarship on the evolving genres, contents, infrastructures, and institutional workings of American magazines in chapters two through four alone make her work an important source on magazine production and distribution.

END_OF_DOCUMENT_TOKEN_TO_BE_REPLACED

Nancy Glazener. Literature in the Making: A History of U.S. Literary Culture in the Long Nineteenth Century

Early in her engaging new book, Nancy Glazener describes literature as both a “collective invention” and an “institution” (3). In this way, she attempts to argue for its status as a construct – created collaboratively and refined over time – even as she suggests that literature also has a settled monolithic quality propped up by libraries, schools, publishing houses, and other large seemingly-static forces.

END_OF_DOCUMENT_TOKEN_TO_BE_REPLACED

Michael C. Cohen’s The Social Lives of Poems in Nineteenth-Century America is a fascinating and full account of the relationships between poems and readers between the 1790s and early 1900s. Dedicated to a “lived history of literary writing in the United States,” Cohen investigates the “variety of social relations that poems made possible,” both materially and theoretically (1).

END_OF_DOCUMENT_TOKEN_TO_BE_REPLACED

French literary history has long had a problem with authority. What is the core of the French canon? Who is the greatest French author? The most influential? The most revered? Unlike many national literatures, French literature provides no clear answers to these questions. Whereas England finds Shakespeare at the centre of its national theatre, France sees Racine, Molière and Corneille. The Italians claim Dante as a national poet, but France has diverse poets of similar stature in its own history (e.g. Ronsard, Labé, Hugo, Baudelaire, Rimbaud, Mallarmé, etc.) Exploring this unease with literary authority, Seth Whidden’s new book provides many convincing arguments about why authority is so fraught in French literary history.